Every city started somewhere—like the classic, quirky song Istanbul goes, “Even old New York was once New Amsterdam”—whether it can trace its ancestry as far back as ancient Londinium or only to the comparative upstarts of our Western homesteads. Historic homes or heritage sites (such as the grand Ellis-Shackelford House, featured previously) are vital parts of the character and soul of our city, and they can provide much-needed oases of quietude in the rush of modern life. However, it can be difficult to find these remnants of older days in the surge of urbanization. It’s even more challenging to ensure that these pieces of history survive for future generations. Turning an antiquated structure designed for family use into a space which can accommodate modern visitors is a beast of a task, as any renovator can tell you. So, what are the main concerns when preserving and/or repurposing a historic building?

Of course, one of the most important things to keep in mind is the value of maintaining the integrity of the building’s origin. With a historic home, this often translates into a significant amount of time and energy spent tracking down and procuring materials or furniture pieces that correctly mirror what the house may have looked like in its original state. The restoration of the Rosson House in Heritage Square is an excellent example; in an interview with Thomas Walsh, late former mayor John Driggs recalls how they removed the old and damaged wallpaper from all of the rooms, saved and sent samples to manufacturers in New York, and then re-papered the walls with exact replicas of the original designs. He went on:

“[I]n almost every case we had to literally duplicate and replicate pieces of hardware, doorknobs, and latches for the screen doors…I did not want to ship it. So I took it all over in a motor home to California to a place where they cleaned up all the hardware and replicated door knobs and everything else we needed.” 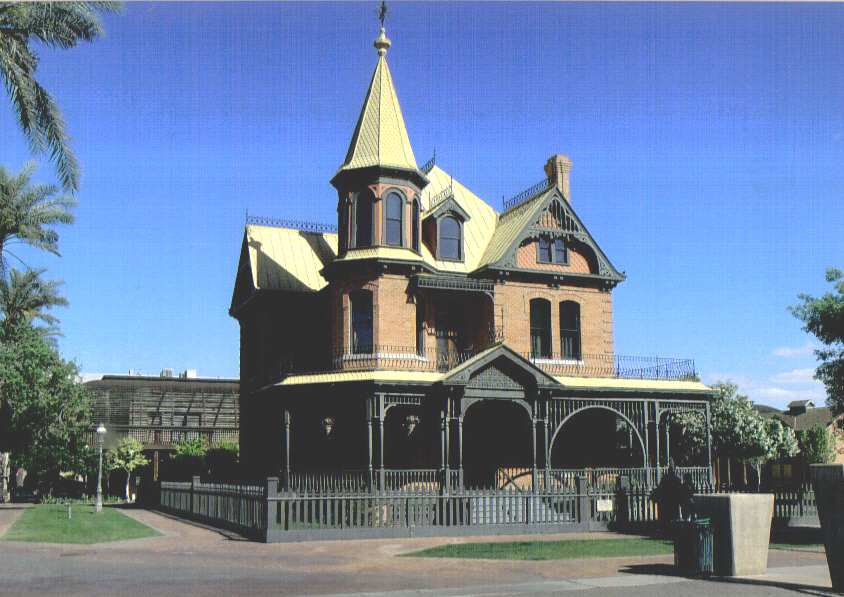 The Rosson House took years to restore, but because of the dedication and attention to detail of Driggs and the rest of the team it stands now as a gem of the Queen Anne Victorian style, and consequently one of the most engaging destinations in downtown Phoenix.

Another major consideration is respect for and compliance with modern ADA codes—the history of a city is something which all of her citizens share in and contribute to, so it should be available to all of them alike. One must balance, then, a dedication to accuracy with the necessary alterations and accommodations which make an area a truly public space. A brief released by the Technical Preservation Services (a branch of the National Park Service) lists these as the central priorities of restoration with an eye to accessibility:

In our conversation with Missy Shackelford, she mentioned that the attic space of the Ellis-Shackelford House was originally used for parties and receptions; it would have been accurate to restore the room to its former glory and make it a centerpiece of the tour, but it also would have been impossible for visitors in wheelchairs to experience. Instead, they converted the room into a storage space, and it now houses various hardware for modern utilities. Compromises such as these demonstrate that it is possible to retain the feel of the original building while also improving upon its design. In this day and age, one should not have to suffer historic inequalities in order to appreciate and learn from a historic space.

One must keep in mind, however, that all the historical accuracy and physical accessibility in the world won’t matter unless people want to come. The space must be appealing.

Catering to the need for a pleasing aesthetic for contemporary visitors may mean you have to sacrifice a little in both of the previous respects, but it also allows room for creative interpretation. In the official informational video on the Petersen House in Tempe, it is noted that the house had two major periods of habitation, in the late 1800s and the 1930s. Thus, when converting it into a museum the restoration team made the choice to exhibit both styles of interior design, one on each floor of the house.

The emphasis on the appeal of a historic building can become even more prominent when engaging in adaptive reuse as opposed to restoration. The rehabilitation of the old DeSoto dealership building, now home to the DeSoto Central Market, is a prime example of this. Owner Ken Cook and manager Shawn Connelly both wanted to honor its roots and capitalize on the vintage aesthetic, while also making it new and exciting. They focused on exposing and preserving the original brick walls and creating a floor plan which would make good use of the huge open space without taking too much of it away.

The vintage craze may have its downfalls—cheesy, mass-produced facsimiles of retro features being one of them—but it has done the service of encouraging a much-needed revival of popular interest in our precious historic spaces. Whether it comes in the form of restoration of re-purposing, it is vital that we, as a community, take advantage of this interest and continue to shine a light on our past.